A dialogue between Heidi Modica and Kimberly Gladman, who are mother and daughter. Heidi grew up in Hamburg, Germany.

Kimberly: This month’s issue is about hygge. It’s basically like Gemütlichkeit in German.

Heidi: If people want Gemütlichkeit, they should get a cat!

Kimberly: Agree! It’s the first thing I did when I moved into my new apartment: get my cat Murphy. A home doesn’t feel furnished to me without one.

Heidi: They’re generous companions. They sleep with you, purr and love to be pet, and mine always brought me gifts: Sometimes a dead mouse on the front porch in the morning, sometimes leftovers from a chipmunk, and one time: yellow feathers and the head of our neighbor’s yellow canary. (We never could figure out how he got into the cage).

Kimberly: I know, they’re killers, right? At the same time that they’re so cuddly. . .

Heidi: One of mine used to bring me snakes: a small garden snake, a larger garden snake, once a small copperhead, all dead but otherwise uninjured. I think if she did not eat them, she must have thought they would be a delicacy for me.

Kimberly: That’s right! Murphy killed a mouse that came up through a hole next to my radiator one night. He ate most of it, though: all he left for me was a little clump of red flesh and a tail.

Kimberly: Tell me about some of the historical cats in our family. I know your mom, my Oma, and lots of other relatives in Germany loved cats too.

Heidi: Well, you know before the war, my aunt Minna had a big white cat named “Bunk” whose mission in life was scaring a little dachshund every day. He would sit on a stone pillar in front of the house and wait for the little dog to come by and then whoosh down on him with a big growling meow, after which he’d run back to the house. grinning from ear to ear. Another one we called Peter the Fisherman: he knew that the woman who sold fish came around every Friday with buckets of fish hanging on her cart. Peter would dash out of nowhere into one of the buckets, steal a fish, and run away with it. The lady was not amused: he ran up a tab.

Kimberly: They’re really a presence in our lives. Now that I work at home, Murphy sometimes come to Zoom meetings, and I text my kids pictures of him all the time during school so they can see what he’s doing. Which is mostly sleeping in different places, but he also comes up to me or anyone else in the apartment who seems upset or needs support.

Heidi: Yes, all my cats have been good to me whenever I was sick. They would lie next to me in bed and purr until I got better; each  had a distinct personality. My latest cat Buddy is the most mellow of all. He now has diabetes and needs insulin just like I do. He is especially affectionate with me and I think he knows what both of us need. A noble animal indeed! 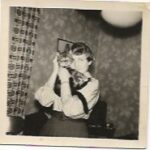 Getting Hygge With It: Danielle Polemeni

What Do You Make Of It: Hilary Sallick

Home is Where: Susan Tornheim

All of this is to say: Greta L. Ode

from A Woman of Will: Coeur Rebelle

from Shorting the Earth: Kimberly Gladman