In Praise of Donkeys

There is a small town in Arizona called Oatman, located on a remnant of the Old Route 66 which once connected Chicago to the Santa Monica Pier in California. It is home to a herd of wild donkeys which roam the street. They were left behind when the miners quit and have been adopted by the town, which now has a major tourist attraction in these velvet-nosed gentle creatures. On any given day Oatman is full of tourists who buy food for the donkeys, the kids play with them, people take lots of pictures and then they spend lots of money in the local tourist shops. Oatman was famous as a hangout for Clark Gable and Carol Lombard, who spent their wedding night at the local hotel after getting married in nearby Kingman, and they often returned to escape the Hollywood crowd. Gable was a regular in the local poker game!

But the donkeys made the town famous; the hotel restaurant even has “ burros ears” on the menu (relax, it refers to specially seasoned potato chips). The Bureau of Land Management lets you adopt one of them if you can prove that you have enough space and shelter for them, but mostly they are content to nuzzle each other and beg for more food. Every time I visit I bring cherry tomatoes and delight in their antics; it makes me think of how wonderful and useful they have been through the ages.

In the nearby Grand Canyon the team of donkeys have a perfect track record for taking people on the narrow trail into the Canyon and back out; they never lost any one. Helicopters crashed, planes collided, cars rolled over the edge, but the sure footed little animals are champions of that kind of hazardous travel.

My second husband grew up in Sicily and his grandfather had five donkeys; they brought luggage from the train station, delivered vegetables from the fields and in general were the UPS of the 1920’s. After World War II only one man owned a car in his town, an old Fiat that often would not start, and after letting it roll down the hill to try and get it going it was always a team of donkeys who had to pull the old wreck back up into town. My husband remembered, also, that he often slept in the stable in the soft hay with the animals when his father threatened to beat him with a belt for some minor infraction.

The most famous rider has to be Jesus, the founder of all Christian religions, when he made his entrance into Jerusalem on a donkey, and therefore there are so many pictures of them in religious art. I recently played cards in a casino in Las Vegas and one elderly Jewish man assured me that in Israel every family had at least one donkey when he was growing up; the animals worked for food and you did not need a drivers license! Somehow it made perfect sense to me.

So, it is time to acknowledge the enormous contribution this little animal has given to mankind, moving goods, buckets full of silver and gold ore, pulling underground wagons full of coal, walking in circles for hours to bring water out of a well, providing a ride for a Holy Man and giving comfort to a scared little boy in Sicily! And they are so cute!!!!

In Praise of Donkeys: Heidi Modica

The Realms of Possibility: Kimberly Gladman 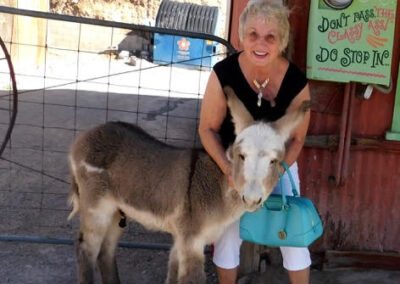 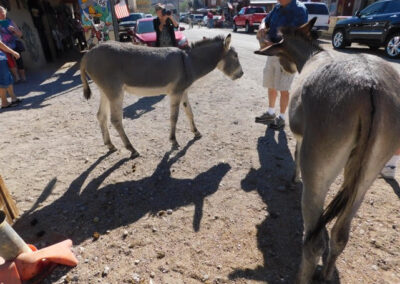